Pieces of my old life often interrupt me while I live the new one, such as with the reminder of Labor Day that I mentioned in the last post. But memories emerge often unexpectedly, and in strange ways.

While riding through farm country in south east Minnesota after leaving the metro area, past the miles and miles of corn fields, the smell of cows would often waft across the rolling hills. It’s a familiar scent. Back in the summer of 1993, I remember visiting my mom’s cousin’s dairy farm in Sebeka, MN. His son, Matthew, was the same age as me. We first met a couple years earlier at church when my dad traveled to Sebeka to speak to the congregation there. “He’s your age, so go be his friend,” someone told Matthew about me after I showed up. So he did.

On this particular summer, I went to the farm for an extended period for the first time. From the start, I wasn’t sure if I was going to handle it. The smell of cow manure permeated the air, leaving nothing untouched. It reeked, and it boggled my mind that no one else seemed bothered by it. “You get used to it,” said Matthew.

In the evenings, after the chores around the farm were done, Matthew and I settled into his room to play his Sega Genesis. The two games we liked the most were X-Men and Jurassic Park. “X-Men” wouldn’t be made into a movie for another seven years, but “Jurassic Park” was the biggest movie out at the time. Matthew even had “Jurassic Park” movie posters on his wall, and when we went to sleep in his bunk beds, I would scare myself by thinking there was a velociraptor staring me in the face through the dark.

Such was the time and space I was brought back to at the scent of cow shit. Almost as if viewing it before my very eyes while I rode past these farms, I could see the 16-bit screen with Dr. Grant fighting off dinosaurs as he desperately sought to survive the park.

Shortly after leaving St. Paul, I began talking to Faraday Fox. For some reason, I did so with an English accent… so I just kept it up for awhile. We discussed the problems of fascists feeling emboldened in this country, though we made little progress in terms of finding a solution. Several miles later, I came across a fellow cyclist who was stopped on the side of a country road. “Hey, can I ask you something?” the man shouted as I rode past. So I stopped, but carried on with the accent. “Where you from?” “The UK,” I responded. “Here on holiday.” It was a posh accent, so I made sure to come up with a proper back story about where I was from in case he asked: Nathaniel Berkshire, Oxford educated, having problems with the job market though, so I’m traveling the states to quench my sense of adventure.

Twenty-two years ago, I was confirmed in my family’s church. Confirmation was a week-long ordeal spent in one of the larger congregations in the church, this time being in Deer River, MN. The boys and the girls were separated, for the most part, so I spent most of my time with the boys, namely Matthew, who happened to be part of the same confirmation class. I didn’t really know anyone else very well, though a few became close friends for many years, until my apostasy at any rate. 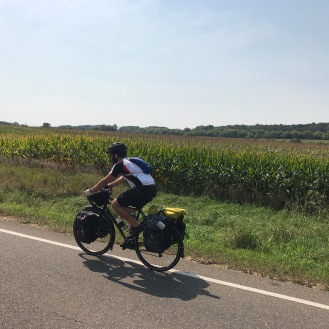 Memories of this week back in 1995 came rushing back because one of the ongoing themes of my confirmation was how my friends and I kept speaking to each other in an English accent, making up stories about our alter egos, and laughing at the ridiculousness of it all. I don’t recall if I referred to myself as Nathaniel back then, but I’m certain I never told anyone that I was an Oxford-educated gentleman adventurer. Still, I was always impressed by Matthew’s ability to do the accent (at least when we were both 13), so I hoped that I managed to maintain it just as well while talking to the fellow biker on the side of the road. We took turns taking action pictures of each other riding (see above), then rode together for the next mile or so. I tired of keeping up the ruse, so I purposefully rode slower, blaming the weight of the packs, so he eventually pushed on ahead.

When I finally made it to my friends Jen and David’s house just north of Rochester, conversation quickly went to bourbon and beer. David is a bourbon aficionado, with an impressive collection of bottles on display in the dining room. Jen is the beer geek, with her own growing collection of unique bottles in both the refrigerator and a beer closet in the basement. I obviously get along famously with them.

That evening, while sampling different whiskeys and beers, and enjoying a few artisan pickles that I had acquired the week prior, we started talking about the swill that was drank at 21 when you just wanted to get drunk. But I didn’t have any of those stories. At 21, I was still a faithful member of my family’s church, and quietly disdainful of those who would pollute their bodies in such a way. Intoxication was a sin, and drinking in any quantity was to court sin, so it was to be avoided entirely. I didn’t actually have my first beer until I was 27, the same age that I got piss drunk for the first time. So at the talk of inexperienced drinking around Jen and David’s table, my mind went back to 2009, Labor Day weekend, where for the first time I skipped church and instead flew to Baltimore to see Matthew, who had also left the church and was now living on the east coast, studying art. The night that I arrived, we bar hopped around his favorite neighborhood, and I drunkenly lamented the problems of the church and my failing marriage. And the next morning, I vomited in the streets of downtown Baltimore, McDonald’s breakfast sandwich in hand, as passerbys no doubt cringed at the sight. The walls of the holy temple fell around me when I realized I didn’t believe anymore, so why not pollute the bodily temple a little bit too?

It was a right of passage that I was experiencing a few years late. And as a matter of fact, that’s very much how I’ve viewed this bike tour as well. Now in my mid-30s, I wish I would’ve done this trip a long time ago. Who knows how many more adventures I could have under my belt by now had I discovered such pleasures right after college.

All things in good time though. All I can do is simply make sure I don’t squander the next 10 years in the same way.