Strangers wait in the
daylight. Motives of kindness
give travelers homes.

“I have always depended on the kindness of strangers.”
-Blanche DuBois

Despite the dark tone the above quote has at the ending of Tennessee Williams’ “A Streetcar Named Desire,” I’ve certainly found that Blanche gave some inadvertently good advice. My time on the road has demonstrated a wide-range of goodwill, from mere friendly conversation and well wishes, to genuine hospitality and gifts. Recently, I was given a couple extra tire tubes by the friendly folks at Ruby’s bike bar in Davenport, Iowa, completely free of charge and outside of regular business hours. And at the very beginning of this trip, a lovely old lady working at the Palisade Café in Palisade, Minnesota, made some cordial small talk with me at the end of my first day’s ride, curious about what was happening with my adventure.

It’s hard to distill in a few words the impression that many of these people have made on me over the past few weeks. And I’m comforted by the fact that these impressions show no sign of letting up. In fact, I’m depending on it.

After I arrived in Decorah, Iowa, I pulled up to Toppling Goliath Brewery; an intended destination since before I left on this trip. Unable to make a decision, I ordered a flight of beers and went outside to the patio to sit and enjoy my variety of brews in a place where I could keep an eye on my bike. And just at that moment, a couple more bikers showed up while I went back to the bike to collect my drinking buddy, Faraday Fox, from his perch. The numerous bags on the bicycle have always been a conversation starter, so the two asked where I was from, where I was going, etc.? After chatting for a minute, I told them I was just sitting by myself on the patio and that they should join me if interested.

Ben and Sarah, it turns out, lived in Dubuque, and were in Decorah for a short, mid-week vacation to do some biking around the area, as well as to hit up a brewery or two. We hung out on the patio while a couple other folks brought their dog in, who took turns making friend with each of us, and talked about our professional backgrounds and interest in bicycling. Turns out that Sarah is an anesthesiologist and Ben is a film maker. After a short while, I mentioned that I was told Pulpit Rock Brewery was a place to check out, which was just down the street, and so I asked if they wanted to join me there. Pretty soon, we settled up our tabs, and rolled down the cracked streets of Decorah to the new brewery on the block. 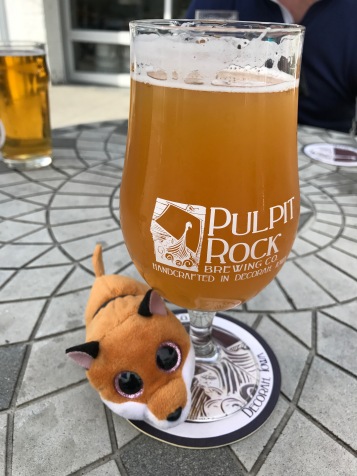 Pulpit Rock was recommended to me by both my friend Jen, whom I detoured off the Mississippi River Trail to visit, as well as by a bartender at a brewery in Rochester. Word on the street was their beer was the bomb. Ben and Sarah hadn’t been there either, and none of us were let down. This was in part because we happened to run into another biking friend of theirs on the Pulpit patio, Patrick. Together, the four of us drank incredible IPAs and talked about riding adventures, particularly RAGBRAI (aka, the Register’s Annual Great Bicycle Ride Across Iowa; nearly everyone I’ve spoken to in Iowa insists I do this). Before we all parted, Sarah gave me her contact info so that I could get ahold of her once I made my way to Dubuque.

That evening, I spent my first night with a Warm Showers’ host. Warm Showers is a website developed by and for bike tourers to allow people on trips like this to meet up with others who can offer a place to stay and clean up. It was late notice, but Debbie was a courteous host, encouraging me to make myself at home while I stayed at her house, which I gladly did after several beers at two different breweries. I plugged my phone in to recharge, and slept like I was dead.

The next morning after finally finding my way out the door, I slowly poked my way around Decorah, interested in finding a decent café to write at before leaving town. At an intersection near downtown, I heard a faint “Nathan,” while I debated which way to turn. This was confusing since I only knew four people in town. But about a half a block down was Ben, out for a morning stroll while Sarah was still sleeping. “Let me get your contact info so that we can talk more about some of your plays,” he said after we talked about what the best coffee shop in town might be. The day prior, I mentioned that I had written a number of plays, most recently “The Ballad of Newton Badger.” He mentioned that he had directed a few animated films, so I brought up “Newton Badger” as an excellent candidate for animation. As it turns out, this trip might have also developed an interesting professional resource as well as a friendship and a place to crash.

A few days later, after conquering the hills of the Mississippi River Valley between Iowa and Wisconsin, I made my way to Dubuque. By this point, it was the weekend, so when I texted Sarah about staying at their place, she told me that she and Ben actually had commitments over the weekend and couldn’t host me. She did, though, give me suggestions on some great breweries within Dubuque that I should check out while there. So I returned to Warm Showers to see if I could find anybody who would take a weary traveler in last minute.

I messaged a few people, and Jack responded. While sitting at one of the breweries recommended by Sarah, he texted saying that he happened to be also hosting a trio of canoers making their way down the Mississippi River as well. They were just at a meet and greet for an Iowa gubernatorial candidate in the same neighborhood, so he and the canoers stopped by the brewery to meet me and to have a pint.

Jack, I soon found out, is a man about town in Dubuque. A cultured town historian, a person to know, a man with friends and associates spreading out of him like heads on a Hydra, Jack proved to be a fine host. Despite not being a biker himself, he was a member of several traveling sites, such as Warm Showers and Couch Surfer. He simply enjoyed showing people warm hospitality when they came through his town, learning about them, and consequently making new friends in the process. It was just the way he was. When asked why he hosted so many people, he said that he was part of a long Iowa tradition of giving travelers a place to stay, whether it be in a loft in a barn or in the house itself. And when pressed to say why he specifically wanted to be a part of this tradition, he quoted Hebrews 13:2 – “Be not forgetful to entertain strangers: for thereby some have entertained angels unawares.”

Despite my plans to be on my way by mid-afternoon, after he took me and the canoers (known as Kassidy, Ricky, and Noah) to the “Field of Dreams” site about 30 miles outside of Dubuque, I asked if it would be alright if I stayed just one more day.

That afternoon, Kassidy, being another beer snob, and I hit up another brewery. After a few pints over philosophical discussion, we were asked to join the rest of the group at the home of another of Jack’s friends that overlooked the whole river-side of the city; which we had to take the world’s steepest, shortest trolley to get to. We ate Havarti cheese and drank IPAs, then all went for a tour of Eagles Point Park while Jack narrated the city’s history to us after passing each landmark. Once back to his place, we enjoyed some curried chicken and vegetables, with spiced rum baked peaches and ice cream for dessert.

I did in fact leave the next day, despite the warm hospitality shown to me by Dubuque’s favorite son. I had to, for there were more people to meet as my adventure carried forward. I still had to meet Dustin in Davenport, and the owners of the hidden Odessa Grill, Dan, Steph, Brian, and Kris. And who could forget Laura and Jeff, who I sat next to at the Potosi Brewery. Turns out Laura is both an alumni of the University of Minnesota as well as the Blandin Community Leadership Program, as am I. Or the caretaker of the bike trail outside Welch, Minnesota, who shared his donut with me as I struck camp. There’s a story with each of them, and many more people to list, but the only way to truly know them all is to live the journey yourself. Some stories will just have to be for me.

One thought on “To the friends not yet met”