The corners of a
city curve with each look; blunts
by discovery.

After arriving in St. Louis, my first thought was that I had no idea what the hell to do. I had spent three weeks slowly completing this journey, and then, one day, I was there. Fortunately, I at least had an initial stopping point lined up. So after the obligatory picture of the Gateway Arch, I moved on to Roger’s place, the man who was kind enough to host me via Warm Showers.

Roger lived in a flat downtown. Of all the people I contacted on Warm Showers for a place to initially crash in St. Louis, I was crossing my fingers that Roger would get back to me considering his amazing location. I found his building, took the elevator up to his flat, and quickly proceeded to the shower to wash away the film of sweat I had been developing for the past few days.

But I had a mission to accomplish. As I mentioned in my last post, I wrote a novel a couple years ago that takes place in St. Louis, and is in major need of some heavy editing. So my job in St. Louis was to do a bit of city research, to get a little lay of the land, to get to know the different neighborhoods a little bit.

First, though, I needed to deflate. So after showering and throwing my sweaty clothes in the washing machine, I took to the streets by foot to visit Schlafly’s Taproom. In a way, my research had already begun because, well, I was learning the neighborhoods of St. Louis by default by walking them. I took in what I would for the benefit of the novel, but I had made it to my destination! As the pedal cleats on my shoes clicked along the sidewalk, I had an air of satisfaction with myself as I made my way through the mean streets of downtown St. Louis. And I got to feel right at home as soon as I pulled up to the Schlafly bar when the man sitting a couple stools down looked at me and said, “What are the odds?” He pointed to my shirt, which said Surly Brewery on it, and then to his hat, which said the same. The brewery tour portion of my adventure had gone as far south as it was going to, and I was given a fun little reminder of my home up north. What are the odds, indeed?

My research began more formally the next morning as I set out for Forest Park, a few miles west of downtown. My novel’s main protagonist, Andre, spends a morning walking east through the city at dawn, watching the sun rise through the Gateway Arch. So as I rode across town on Market Street, I kept looking back over my shoulder to see if I could still see the Arch, taking mental notes along the way of what I was seeing (You first see the top of the Arch at Beaumont while walking down Market, in case you were wondering).

Andre is in town with the circus, so where better to set up the big top than in the biggest city park in the country, Forest Park. Roughly a third larger than New York’s Central Park, this place was enormous and had everything. It was the stage for the 1904 World’s Fair, one of the most culturally and scientifically influential fairs the world has ever known, and as such a lot of infrastructure was left behind for future organizations and events. Beyond the trails, trees, and other recreational “park” stuff, Forest Park was home to an outdoor opera venue called the Muny, the St. Louis Art Museum, the Missouri History Museum, and the St. Louis Zoo. 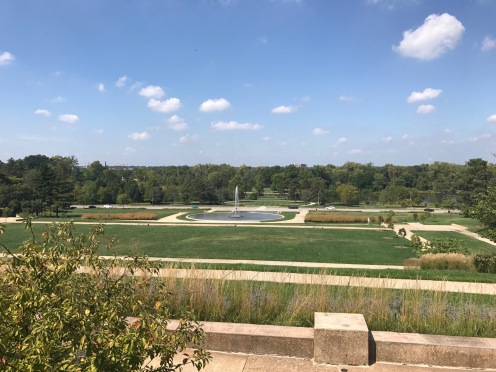 A view from the World’s Fair Pavilion.

The stage of the Muny.

By mid-afternoon, I was starting to get hungry, so I decided to leave the park to find a place to eat. I ended up at The Pat Connolly Tavern, an Irish pub and a bit of a St. Louis landmark right on the edge of Dogtown, the St. Louis Irish district. And with a beer and some food in my belly, I felt about ready to get back to some default research while I just visited some breweries and otherwise just biked through town.

I met Roger for dinner later that evening once he was done with work. Just south of downtown in a rather gentrified neighborhood, we hit up Square One Brewery and Distillery. Talking with locals has always been one of the best ways to get an intimate taste of a city, so being able to spend some time with this man proved to be invaluable. And besides, he was a pleasant, interesting man, and a welcoming host. Though I didn’t want to overstay my welcome. I had already spent one night on his couch, was about to spend another, and I knew that he was leaving town for a couple days starting the next morning. But after mentioning that I was going to seek other accommodations for the rest of my time in St. Louis, Roger said that I was still welcome to stay at his place if I wanted. He was going to be gone, but if I was willing to water his plants, it was perfectly ok if I spent another night or two on his couch. The kindness of strangers has yet to cease amazing me.

The night was young and Roger had more plans, so we parted ways after finishing dinner. But before he left, he told me that before I went home, I needed to go to the Venice Café. He suggested some eccentricities about the place, said it was a must-visit, but left it at that. If what I was looking for was a wide selection of craft beer, it wasn’t the best, but that’s not why you go there, he added.

So I biked further south into the city after dark. The mostly residential streets were only lit by the occasional street light and passing car. I kept an eye on the map on my phone to see how close I was getting to this new bar. And then, with a faint neon glow, the Venice Café appeared, an eclectic mix of the obscure and bizarre, mosaicked together like a Dr. Seuss kaleidoscope. For 40 years, the owners of this bar had gathered tiles, signs, statues, pictures, figurines, fountains, lights, and even an old speedboat, to create a bright spot in what is the otherwise dim Benton Park neighborhood of south St. Louis. 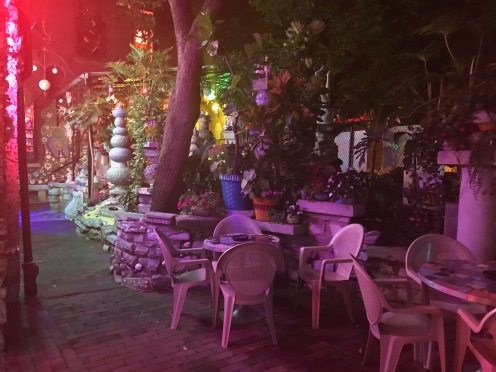 Part of the Venice Cafe patio.

After getting a beer inside, I stepped out to the patio, where I eventually settled in at the speedboat, which doubled as an outdoor bar. It was slow that night, so Betsy, the patio bartender, spent much of her evening joining me and Dan, a fellow patron, with a beer and cigarette in hand herself. Local politics were discussed, as well as a few other St. Louis cultural oddities. I found out that despite the fact that Missouri is known for being quite conservative politically, the mayoral races of St. Louis always go to the winner of the Democratic primary. According to Dan, St. Louis is a bright blue spot in an otherwise red state. And it has a rich history with unions as well. In fact, the harshest insult a St. Louisian can call another, and Betsy backed this up, is Hoosier. Dan told me that decades ago, during some labor strikes, scabs from Indiana would often come to the city to fill in jobs, breaking the picket lines. Though the country fell in love with Hoosiers after the 1986 Gene Hackman film of the same name, the people of St. Louis were all wondering why the hell a movie would purposefully be called such a dirty, dirty word.

The hours kept ticking by, and I had plans for the morning, so I sadly settled my tab, wished Betsy and Dan a good night, and walked back through the main bar to get back to my bicycle. But before I left, I was treated to a few songs by a blues quartet that had set up inside. It was a fitting end to a day spent experiencing such a city, with some genuine, raw, St. Louis blues.

One thought on “Meeting St. Louis”